Lester Young on "Back Home in Indiana"

I lost the CD I originally heard this stunning solo on, transcribed it off a youtube video which was subsequently scrubbed. There's a few versions of Prez doing "Indiana" on there, but I can't seem to dig up this one so I can't post the URL at the moment.

It always makes sense to transcribe Prez' version of the head, that's the first chorus in Ab, after which he modulates to F. He actually takes 4 or 5 choruses on this cut, though I only did the first and a couple of bars of the second.

Quarter notes whether on or off the beat should generally be understood to be held for less than their written length, but using the articulation (^) would in most cases be giving it too heavy an accent. The chord changes are the generally understood stock changes for "Indiana." There might be some variants in the recording (I think the piano player is Teddy Wilson) but again, I don't have it to hand to refer to. In any case, while making lead sheets I believe in providing the simplest possible version of the changes. 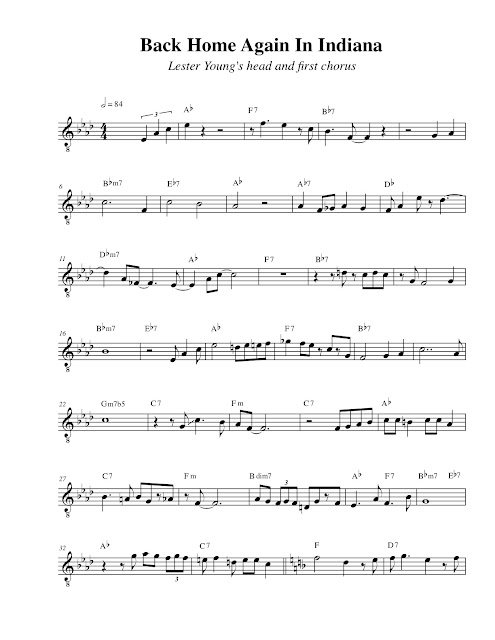 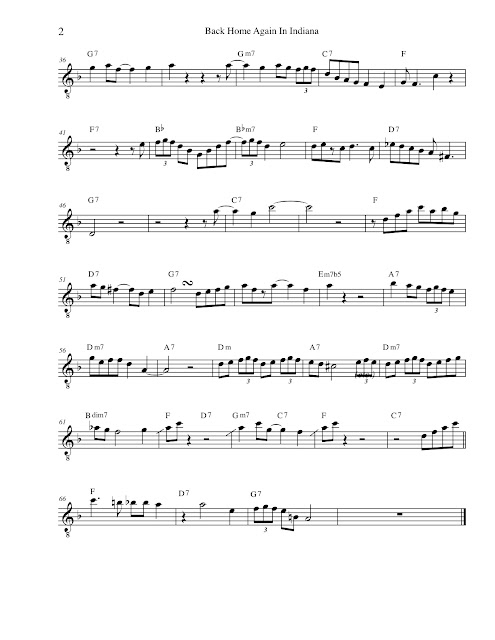 I love the leisurely ascending line at the top of the first blowing chorus. Note also how bars 42 - 49, three distinct phrases, are tied together by the stepwise line F-E-D-C. The way he articulates dominant 7ths - or doesn't - is worth a look. Only once does he play the third (E) of the dominant C7. He is much more likely to play something "chord specific" over the secondary dominants G7 and D7. My own observation is that playing to the actual chord of the moment only becomes more necessary - if ever - the farther you go from the original key.
However, the main thing I'm picking up from this solo is how each phrase is kept within a relatively small range: see for example the two phrases between bars 58-61, and 62 (starting beat 4 of 61) - 64. I would actually say that this phrase extends through the half-note rest in bar 65. Tightly focused phrases like these make it more possible to connect one to another, the way these two are.
I remember my first whack at taking down this solo. I just thought it was kind of sweet. Before long though, being struck by the level of deep organization and craft that went into this seemingly tossed-off gem, I quailed I'LL NEVER BE ABLE TO DO THAT!! and - I admit, using Lester's own words  - "so I went away and shed my little tears, you know?"